I have been planning to make an upright arcade cabinet for a while now because I have always wanted to own one! Where I live, there aren’t a lot of arcade halls, on top of that playing games there cost a lot of money.

Building a cabinet might be a bit to big of a project for an inexperienced arcade builder, so I have decided to start smaller: an arcade controller. The components will be placed in a wooden box and I hope to be able to put some nice video-game related art on it, most likely of some of my own games. 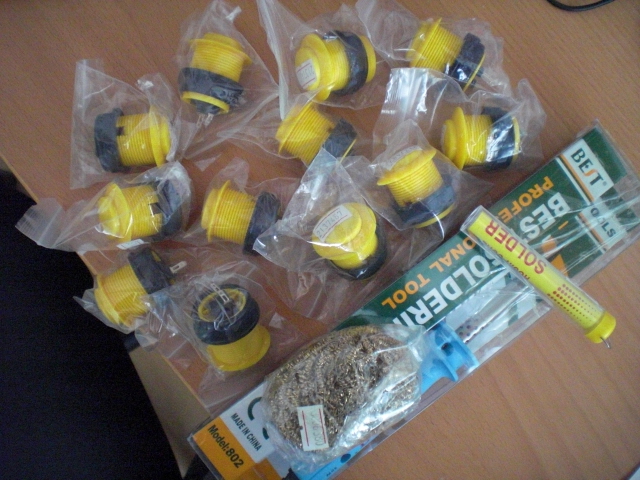 A package arrived at my house containing the following:

Because all the buttons that I got were yellow, I tested if I could paint one using some miniature model paint. I painted one grey and another one green. The grey one came out better than the green one so I decided to paint the other one grey also and add an extra layer of grey to both of them. This created a problem where the button was hard to press because there was dried up paint between the moving parts!

After doing some research, I came across several options to get the button inputs to be read by a computer, the following seemed best to me: Arduino and the I-PAC. The first one, the Arduino, is more expandable and might become useful in future projects. The I-PAC is nice because all the hard work is done already, and I can rest assured that it will be fitting for my purpose, since it has been designed specifically for arcade projects.

I’ll have to think about which approach to take when it comes to the keyboard encoder, meanwhile, I can work on a box to house the buttons and the circuitry. Stay tuned for part 2!