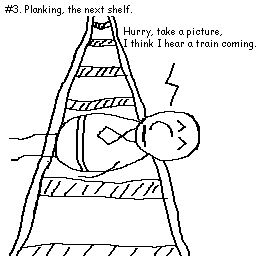 Planking, the act of being in a rigid horizontal state whilst resembling a plank, is something that has gotten increasingly popular over the past month. Placing a picture online of you doing the latest craze ‘planking’, will surely lead to a great number of responses. There are even Facebook pages set up to connect people that share this strange hobby.

The question has been raised as to whether or not the planking hype has gone to far. For example, in Australia there was a group of female students expelled for planking earlier this week. Fortunately, their act did not lead to any injuries but the principal did have a chat with the parents. As with anything there are extremes, whether it is sending students home, or a man killing himself whilst planking.

This very sad event has however, lead to the sudden increase in popularity of planking. Due to the amount of media attention generated by the tragedy, more and more people have begun attempting their own planking adventures. Others – according to the article – “have already condemned the internet craze on Facebook following the man’s death.”, so there are more people who now acknowledge the dangers of planking.

Will there be more casualties or will people learn from the mistakes made by others? When looking for planking on google trends it seems that the craze has already peaked and is now in decline. Hopefully this means that there will be no more people trying to hurt themselves or others. If you consider planking you should ask yourself: is a silly photo worth more than your life?