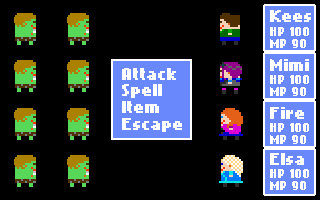 In the picture above you can see a mock-up I have made for the battle engine that I might implement in the sequel of Letter for Mimi 2. Writing the code for this part will take a lot of time, so it will not be included in the second installment of the Letter for Mimi series.

The layout is based on the Final Fantasy 1 battles, the player’s party is located on the right side and the enemies on the left side. The middle will feature a choice menu in which the player can select an action for each of it’s conscious party members. Each party-member has a small block showing his/her current health points and magic points. The white edges can change colour to indicate ailments and buffs. For example, a poisoned character might have a green edge surrounding its info-block.

I think this is a better and more flexible layout than the previous mock-up I made. The screen feels a bit empty at this moment, but then again that might be a good thing as it draws attention to the status of the party.