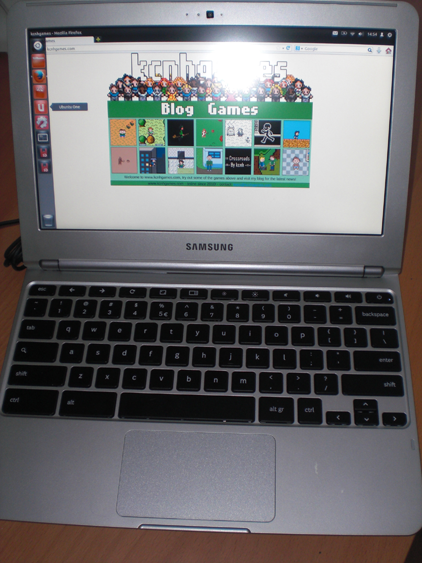 I recently purchased a Samsung Chromebook because I desired a laptop that was light-weight and cheap. A Macbook Air was a bit too expensive in my eyes, so I settled for a Chromebook which I installed Linux (Ubuntu) on. Installing another OS was a lot easier than I had anticipated, I followed this guide written by Jay Lee.

The script has some errors in it: while installing you can specify the flavour you want, you should not use the default option as advised. By using the default option you are left with a version of Ubuntu that has no GUI and (in my case) no working wifi, which makes it impossible to sudo apt-get install a GUI. I had to reinstall and this time specify ubuntu-desktop as the flavour, which resulted in a working system.

When you have your ChrUbuntu up and running you will have a lot of difficulty moving your cursor with the touchpad. Fortunately, there is a fix that will save you a broken wrist: you can find it here.

The speakers in the Samsung Chromebook are sensitive, so try not to fry them.

I would suggest buying a Samsung Chromebook if you plan on using it just for checking your e-mail and browsing the internet. When you are a bit tech-savy you can install Linux so you can unlock more features, which greatly increases the usability and value of your Chromebook in my eyes!