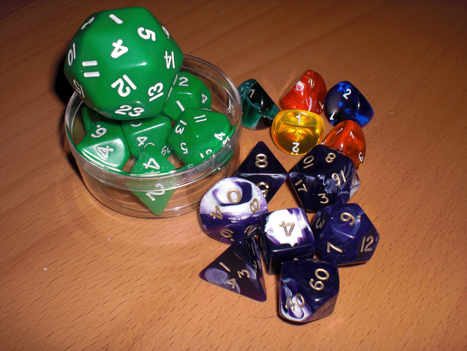 As someone who works with computers every day it is only a matter of time before you start playing Dungeons and Dragons, or ‘D&D’. I played my first game two weeks ago, and it was a lot of fun. The dungeon master, ‘DM’, was a bit unprepared for all weird things the group of adventurers were trying to pull. Whenever an action was out-of-the-question, a non-playable-character would say ‘I don’t have time for such things’, which quickly became a running-gag that evening. It was our version of ‘I used to be an adventurer like you but then I took an arrow to the knee’. I bought a set of polydice, so I could roll with my own dices, you can see the picture of them above. I got two polydice sets, a d30 (which is out of proportions) and five d3 dices, for the fun of it.

The game itself is really old, and you can find it’s traces in video games such as Fallout, Final Fantasy and basically every other role-playing game ever made. Even though I am a player in the game and not the person making the story (that being the DM), it makes me want to start working on games again!