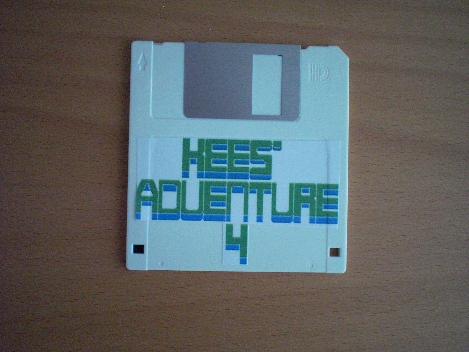 A while ago the idea popped in my in head to sell floppy disks with my games on them. Since all my games are available for free on the Internet, and floppy disks are a bit outdated, I doubt there is a market for these. Either way, I made a prototype featuring one of my upcoming games: “Kees’ Adventure 4”. The sticker I used was larger than the floppy itself, so I had to cut it a bit as you can probably see. The printer I used was a cheap one, so the colours have faded a bit, which is a shame.

If I want to go through with this plan, the design will have to be adjusted so it won’t overlap with the sides of the casing. On top of that, I’ll also have to think of something why people would want to buy this game if it would be online for free, for example by including the source-code or some other extras such as a map.